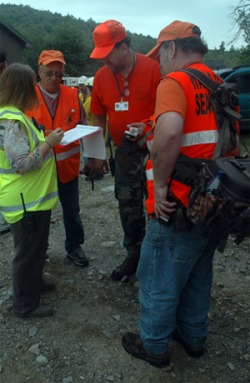 2010
May 30: Members responded to Baxter State Park to assist in a search for a lost hiker. This was one of the most extensive searches in Baxter State Park in the last 40 years. On day 1, Waldo team members assisted in the evacuation of an injured searcher, which was carried out by a medevac helicopter from the Maine Army National Guard. On the second day, they searched a section off the Abol Trail, an old landslide area on the side of Mt. Katahdin covered with boulders, loose rocks, and stunted spruce trees.
The lost hiker was eventually spotted from the air and removed by helicopter from an area well off the marked trail. He had suffered a severe knee injury, dehydration, and insect bites. His own words were, “I feel lucky to be alive.”

May 11–12: Members responded with other MASAR units to the Union-Hope area in Knox County to help search for a 75-year-old Union resident who had been reported missing. This started as a night search — unusual for Maine volunteer search teams — and continued into the following morning. This brought home the importance of having good lights, and many members are looking into getting good head lamps for future night searches. The missing man was found safe in Warren on the second day of the search.

May 8: Several members attended the annual Maine Search and Rescue symposium, held this year at the Navy SERE (Survival, Evasion, Resistance, and Escape) school outside Rangeley, where a good time was had by all and much was learned about shelter building, fire starting, improvised animal traps, edible plants, and other aspects of outdoor survival, as well as ways to improve our observation skills during a search. Many thanks to the Navy SERE instructors who gave so generously of their time!

We traveled to Flagstaff Lake/Eustis on July 18, 2009 to search for a man and a boy who had left their disabled boat and tried to walk to their camp. They were found unharmed before the search got underway. We helped search in Bethel on June 26, 2009, for a missing woman and on April 19, 2009, in Kokadjo for an Alzheimer's victim. Sadly, both were found deceased. 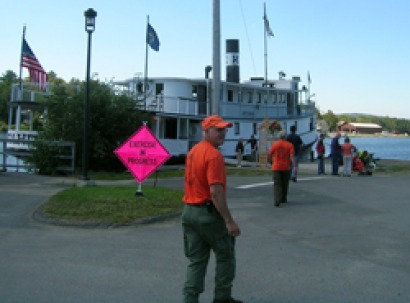 We participated in the search on August 31, 2008 near Salem, Maine, for a 9-year-old Windsor girl who had become lost in the woods the day before. Good weather, a massive volunteer turnout, and the young girl's good sense helped create a happy ending to the family's ordeal.

On August 16, team members participated in Waldo Responder 2008, a full-scale disaster exercise that took place on Frye Mountain, near Morrill. Team members used their GPS skills to guide emergency responders to a remote (simulated) crash site. On August 24, four team members travelled to Greenville to participate in Save the Kate, a Region 4 exercise with a scenario involving a fire on the cruise ship Katahdin.

The team joined teams from all over Maine on November 11, 2007, to help police search for clues in the disappearance of Lewiston resident Donna Paradis. Teams received photos of the missing woman taken by a bank surveillance camera just before she disappeared in late October, and were assigned to search different open areas near Lewiston.

A Waldo County team searching along an abandoned rail line late that morning found a pickax and, soon after, the victim's jacket. This made it possible for police to concentrate their search in that area. Teams took a break while police investigated and then returned to continue searching the area until nightfall. A smaller group of volunteers continued the search the next day, and Ms. Paradis's body was found in a shallow grave.